It’s been said that, as long as something can be considered “posh” and given a convincingly wild backstory (or its rarity can be stressed), there’s somebody out there that will pay through the nose for it. Everything from hamburgers to chocolate has a hyper-expensive version. 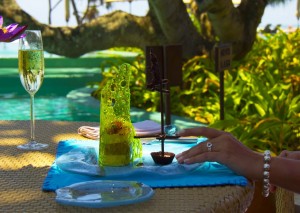 This strangely-named dessert is from Sri Lanka, and can only be found at The Fortress’ Wine³ restaurant. It’s described as “a gold leaf Italian cassata”, which is a traditional round sponge cake.

This particular cake is flavored with Irish cream that’s been infused with fruit. A mango and pomegranate compote with a Dom Perignon champagne sabayon make up the base of this dessert, and the decorations that accompany this thing are handmade chocolate carvings of stilt fishermen, which are common to the area. Oh, and this dish is decorated with an 80 carat Aquamarine stone. 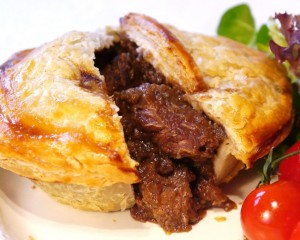 The world’s fanciest steak and mushroom pie is stuffed with Wagyu beef (about £770 worth), matsutake mushrooms, black truffles, gold leaf, and £6,500 in 1982 Chateau Mouton Rothschild red wine, which is only two bottles.

This pie is served with champagne and can feed 8 people. The chef at the Fence Gate Inn in Lancashire claims this dish, and also claims that this version of the traditional steak and mushroom pie is much better and totally worth the cost. 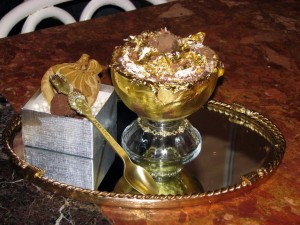 How’s this for decadent? Chocolate ice cream made up of a blend of 28 cocoas, decorated with edible gold, served in a goblet that has even more edible gold lining the bottom. Oh, and 14 of those cocoas are among the most expensive.

If you like getting a prize with your dessert, this one has an 18 karat gold bracelet in the bottom, and that bracelet has 1 carat of diamonds embedded in it.

Still not enough? Okay. You get to take home the gold spoon you’ll be eating that sundae with, which also has diamonds in it. Ta-freaking-da! Buy it at Serendipity 3 in New York City. 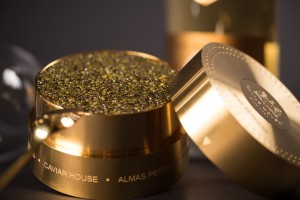 This isn’t any ordinary caviar. Harvested from rare albino beluga sturgeon, ‘Almas’ is an almost pearl white in color and possesses a spongy texture.

The fish that this roe is harvested from are between 60 and 100 years old, and can weigh upwards of 2,000 lbs. They’re about as heavy as a Volkswagen Beetle, so it’s no wonder that it costs £26,700 for just two pounds of this stuff.

It’s usually sold in a gold container, and it’s easiest to procure in Iran since the country’s fisheries are in the good books of the Convention on International Trade in Endangered Species. 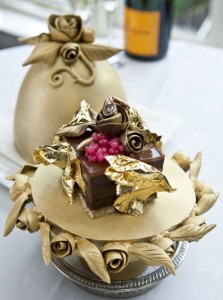 For just $34,500 you could get your hands on a very fancy chocolate pudding created by Marc Guibert, the head chef of the Lindeth Howe Country House Hotel. You’d have to travel all the way to Windermere, Cumbria, to get a taste, however.

Made of four varieties of Belgian chocolate and flavored with peach, orange and whiskey, it also includes the requisite edible gold leaf and some champagne caviar. There is an inedible diamond on top of this dessert, and is served with highly-expensive Chateau d’Yquem dessert wine. The pudding is served in an edible Fabergé egg.

So, not only are you getting the best of the world of chocolate, you’re also enjoying an absolute masterpiece of baking.